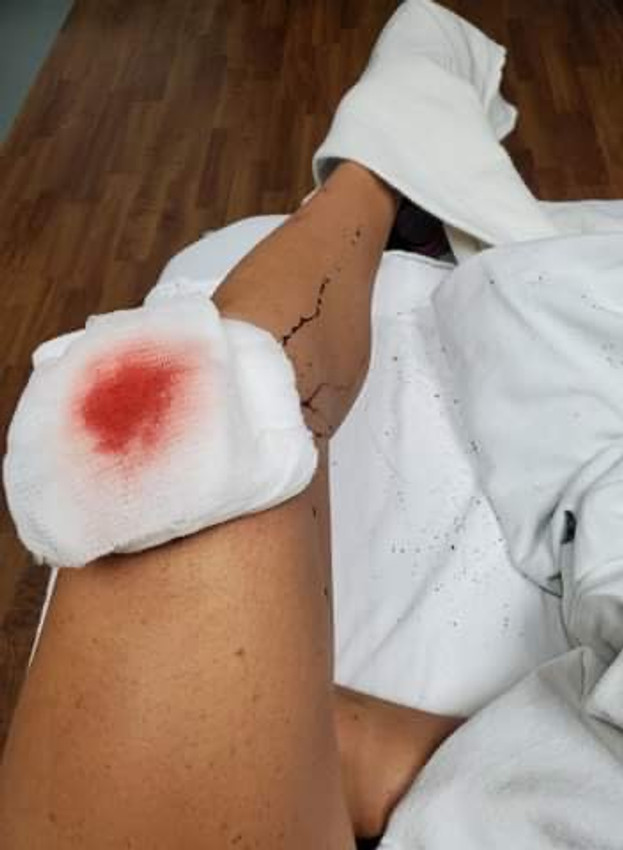 Athlete Testimonial: Ashley Heller and her hit and run

It’s funny (in a peculiar way), how the things we take for granted are in fact the things that most deserve our gratitude. A short list comes immediately to my mind; a bike helmet, a kind stranger, even a clean white handkerchief.

It was Monday, the day after Father’s Day, typically an active recovery day in my programming as it follows my long run day. Active recovery for me on this day included a nice conservative ride on my ElliptiGO bike and then a neuromuscular strength session until…

It was beautiful out. Bright sunshine in the late morning, warm at the end of June. The sweet scent of wild sunflowers, dust on the breeze from the nearby field and a hint of sunscreen I missed rubbing in on the end of my nose; on a route I had ridden from my house hundreds, no, make that thousands of times.

It was so hard to tell immediately what happened. I felt a bump that jolted me forward and then the bike wheels were forced out from under me. It all happened so swiftly. I don’t even know if I made a sound. Gravity suggests that my body did however. For a brief second my right foot was still attached to the bike, everything was sideways, my hands were meeting the pavement. It ripped off my flesh. My natural instinct seemed to be to tuck my body in upon itself, subconsciously decreasing the amount of damage that was about to occur. Now my shoulder was buckled under my body taking the wrath from the pavement that my palms had already assiduously endured. My body parted with the bike as I twisted across the pavement onto the gravel shoulder of the road assaulting every bit of exposed flesh with bits of rock, dust and gravel. I opened my eyes and I was staring at a garbage can inches from my face. I lifted my head searching for some sort of answer, for a reason to the questions I had yet to ask. I rolled over on my side toward the road. A guttural sound escaped my body. I don’t know that I have ever heard such a horrifying noise as what came out of my mouth. A combination of gut-wrenching fear, blood boiling rage, and panic. Paralyzing panic and fear.

What happened? Where was my bike? Why does my foot hurt so badly? Why won’t my arm move? Why can’t I feel my knee? A maroon pickup stopped in the road. A man got out and ran over to me, I am not sure who saw more fear. He reached into his pocket and pulled out a neatly folded, brilliantly white handkerchief and wrapped it around my hand and held on to me.

I escaped the hit and run with a ruptured bursa in my elbow, a sprained right ankle, an enormous contusion across the arch of my foot (that would later need manual therapy so it didn’t calcify), a bone bruise that would turn out to be a fractured tibia in the coming weeks, a lot of bruises, and a whole lot of missing flesh on my hands, knees, shoulders and elbows. But I sure was thankful for that bike helmet.

The flesh wounds to my left knee were the worst. The skin had been removed all the way to the bone destroying the nerves there, and the surrounding tissue was so damaged that stitches were far from being an option. My only solution was a whole lot of healing ointment and bandages. The tissues were so exposed that infection risk was also pretty high so keeping them clean was vital. My hands healed first and the damage to the knee took 7 weeks to seal and I'm still working out that nerve pain.

My main go to for healing was Brave Solder Antiseptic Healing Ointment that I used 2 to 3 times per day every day religiously. It saved my palms from infection and healed the chunk missing in my knee leaving pretty minimal scaring considering.