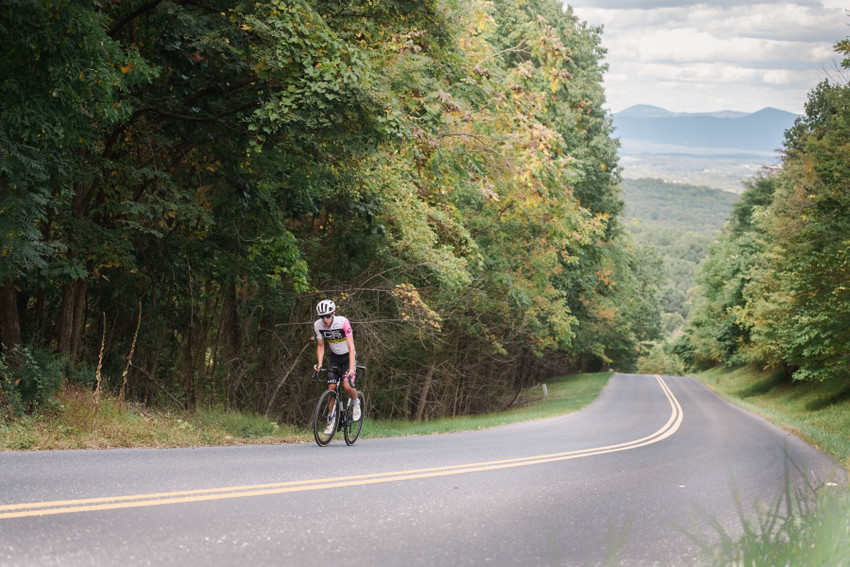 We had a chance to do a virtual interview with Everesting World Record holder Sean Gardner recently. We briefly covered his story earlier after he set the US record, but got into some of the nitty gritty details concerning his second attempt where he attained the World Record time.

What made you want to tackle the Everesting record?

Well honestly, I didn't really come up with the idea to do it until right before. I had seen two of my teammates do it earlier this summer and I saw how much support from the community on them. So I figured it would be cool to give it a go since I am always down for that type 2 fun!

How did you decide on the specific course you did? It was in Wintergreen, VA, correct? If it's the road I'm thinking of that goes up to the ski resort, that's an impressive feat!

The first time I did my attempt in Wintergreen, VA. A section of road right next to it that goes up to the Blue ridge parkway. That was the steepest road I could think of at the time. For the second attempt I got a friend's suggestion to go out the harrisonburg VA to a road called tannersridge that also lead up to the parkway. It ended up being 15.5% for almost a mile!!!

You attempted for the world record twice, falling short of the world record once (still setting the US record) and nailing it a second time a short while thereafter. What things did you do to recover in the short window you had between attempts?

Lots of eating! For the first week after I only did easy rides and used our team's Hyperice products religiously to help speed up the process. After that first week though I threw in a few longer tempo rides to keep the engine running and to remind the legs I had to do this thing again.

What kind of preparation did you put into both attempts? Training wise, did you do anything different leading up to your attempts to prepare for the elevation gain or did you rely on your aerobic base building up to that point?

Well I was kind of unintentionally training for everesting all summer since I didn't know I was going to do the everest until just a few weeks ahead of time. With the lack of racing, I had really just been doing long rides all summer just to try to stay ready incase racing started up again. This was pretty conducive to a 7 hour time trial. But as far as hills, the longest climb I had was maybe 45 seconds long. I probably got more elevation gain in my everesting attempt than I did the entire summer combined. I really just concentrated on staying in my power zones instead. A few weeks out from the first attempt, I did a small training block that consisted of "everest pace" efforts. I would just head out for a 6 hour ride and try to include 3-4 hours at 320 watts which is that high tempo sweetspot zone I was looking to do in everest.

What nutrition did you include in both attempts? What weird items did you have on hand for a mental boost? Did you change anything between the first and second attempt to give you an extra push for the world record? Were you refueling on the descents?

So this was a huge difference each time. The first I made the mistake of trying to eat real food that I would normally eat on a training ride. I brought PBJ's, oreos, fig newtons, gummy bears and poptarts. The effort ended up being too hard to consume and chew that kind of stuff so I ended up underfueling and bonking pretty hard. For the second attempt, I started out with similar stuff like poptarts, cookies, and gummy bears, but I quickly transitioned to gels and gummies. The biggest help was a drink mix I used the whole time. I was really able to keep up on calories thanks to Skratch Labs new drink mix called Superfuel. It has 400 calories per bottle and really helped when I couldn't stomach any food late in the ride. I ended up drinking 7 bottles of that stuff!! I ended up consuming almost 900 grams of sugar which is probably why I want nothing sweet for the few days afterwards!

I had my "feed zone" at the top of the climb where I would take a bottle and a piece of food every lap and chew on the descent so I wasn't huffing and puffing while trying to down a poptart!

Another thing I changed was using sunscreen. I got roasted the first time so I made sure to lather up the second attempt. Luckily we have a great sponsor that gives us all the goods in that department ;)

Did you use a playlist for all that time you were on the bike? Or maybe a good podcast?

I have never been much of a music or popcast guy on rides. I just like to be with my thoughts and let the mind wander. This ride was actually pretty mentally engaging which is contrary to what you would think going up a climb 52 times would be. The first half I really had to focus on not going too hard and pacing myself. I was always thinking about something really. Whether it was seeing if I was on pace, thinking about what fuel I needed to ask for the next lap, focusing on eating food descending at 60mph, or trying to do mental math of how far ahead/behind I was at each split.

I like to think of the mental strength it takes in terms of the analogy of ready and book. At the start it was the mental effort of reading an interesting novel, then progressing to reading a dictionary and then the final few laps were akin to reading an advanced calculus textbook in french.

Anything else you'd like to add for people reading this blog that maybe I didn't ask?

Overall a humbling experience and I highly advise everyone to do it. If you choose the right climb (not too steep) and gearing( as big as you got!) then it can be a really enjoyable experience. When I get back to do another attempt, I think I will try to concentrate a little more on the bike's weight. I used a stock Cannondale SuperSix evo which is one of the nicest road bikes in the biz. But I didn't do anything to modify it. I think I could pull down my time even more if I shaved a few grams off the bike if and WHEN I do it next!!

Overall Stats from my ride,

Time spent climbing out of the saddle: 5 hours and 17 minutes